Ask yourself this question, “What do employers owe the people they do not hire?” I asked myself that question more than a decade ago and it changed my life forever.

On Sunday, January 18, 2004, I ran a help-wanted ad in the New York Times that read in its entirety, “Programmer – Will train, enjoyment of mathematics a plus” followed by an email address. I was heading a statistical arbitrage trading desk and I needed help maintaining all the code I’d written.

I was surprised to get more than 300 resumes and because nobody had experience in the language we use (APL), and I could not gauge learning potential from a resume, I sent everyone a link to a 500-page manual (latest version available here), and I suggested applicants try their hand at a half-dozen puzzle questions they could easily answer in this language.

Thirty-eight people answered the questions so I invited them in for an open house. I had them sit on our trading floor for a bit where they played a game I’d written called BF Game that simulated an information market. We talked about the technology and the nature of our work and then I asked them what they thought I should do next.

Twenty-seven of the applicants suggested I teach them all first and then make a hiring decision, so I ordered tables and chairs that arrived the next day. And the day after that we built a classroom. 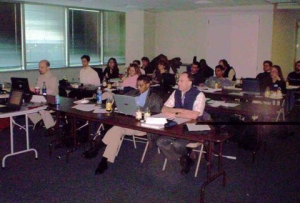 A friend  gave them two days of formal training in APL and then I left them alone for three weeks with some pretty difficult problems. These included the  automation of investment, liquidation, and index arbitrage strategies in BF Game, and the creation of a Bayesian statistical technique for analyzing the words in Tom Sawyer so as to calculate a probability that a given passage comes from Huckleberry Finn.

Within a week they’d created an on-line community on Yahoo with 73 members who volunteered to help them with their project including an out-sourcing company in St. Petersburg, Russia, that sent all their training materials (in English), an author in England who sent a draft of a forthcoming textbook, and numerous trading experts who helped them develop strategies. These eager students opened my eyes to a new way of collaboratively solving problems.

Three weeks later the class had met all my challenges and now I had two problems:

I brought my candidates in asked one question, “If you were me and you could only hire one person and it could not be you, who would it be?” It was fairly unanimous and so I made offers to Orlando and Onyema.

Then I rented a ballroom in mid-town Manhattan and invited everyone from the APL community to meet the 11 of my students who had made it to the end. More than 50 people from as far away as California and England attended and a number of my students were offered work elsewhere.

This unplanned experience taught me that if you care about people they will care back, and with just a little bit of encouragement most people will eagerly learn what you need them to know. I generalized this approach to hiring not only for technical people but also for a wide range of jobs. Hiring in this way has helped hundreds of people learn new things, been instrumental in helping dozens of unemployed people land jobs elsewhere. I wrote about how to do it for Science Careers and Quartz, and other employers who have adopted the same approach have reported spectacular results.

So, here is my answer to the question, “What do we owe the people who we do not hire?”

Changing how I hire has been the most satisfying thing I have ever done in my entire professional career. What about you? What do you think employers owe those they do not hire, and how can you help?

On February 10, 2014, shut down my business unit and retired from Wall Street. Since then I have been helping employers find better ways of hiring people and treating them  better after they do. I would love to help you too.