That’s what I’m thinking, at least.

That’s to say, when I’m thinking at all.

One nice thing is…
… what was I thinking? Hmmm…
… I know, I was thinking how wonderful it is that there can be thirty miles between one thought and the next. What are those? A herd of moose? Some farmer is raising moose? Those clouds seem ominous. I wonder if we’ll see a tornado this trip. I’ve really got to fart. That dog with his head out the window looks like he is having the time of his life. Davis and Zhenia are asleep; if I squeeze one out I don’t think they’ll notice. There goes a van covered in playa dust.

This feels nice; really really nice. It feels like love; as snug as five hippies in a VW bug.

Except that we’re in our white 1996 Isuzu mini-van; three across in the bench seat in the middle. I’m on the right, wedged between my son in the middle and the door on the right. I have a pillow between the window and me to keep my head from rattling against the glass as I drift in and out.

It’s 2010 and my son, Davis, has just graduated from McGill in Montreal with a bachelor’s in physics. He’s fast asleep, head back, not snoring but making the occasional gurgling noises one does as your throat fills with saliva.

Wedged between Davis and the door on the left is Zhenia, a few years younger than Davis. She’s still in college. She’s the black adopted daughter of my best friend, Andy. He’s Ukrainian-American and was named André at birth and that is what he insists people call him now. But when we were housemates in college in the early 1970’s he wanted to be known as Andy. I think he wanted to fit in then. Now, I think he wants to stand out.

Andy’s driving. My wife, Eve, is riding shotgun. She’s my better-than-best best friend – a lover-of-life; my lover. I love our life together.

I feel a seismic disturbance. Davis is fast asleep but Zhenia is stirring and her motions are transmitted through my son’s body to me. 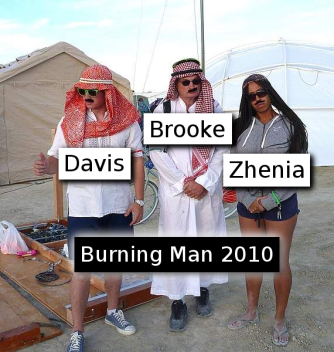 I lean forward to see past my son. Zhenia’s coming up out of slumber. She’s struggling to get her hand in her pocket.

Shit. She’s going for her phone. Please, God, no. We’ve been off-grid for two weeks and it’s been bliss.

It’s a mighty struggle to get her hand into her pocket without waking Davis. She sees that I’m watching her. Softly, she says, “Next time, let’s take our van. It has four captain’s seats in the back.”

I look at her pleadingly. I hope she can feel what I feel and know what I know. Has she learned how to read minds yet? I hope so.

She gives up on her quest. She looks at me for a minute or so. Then she says, “Actually, this is pretty good.” She slumps back, rearranges her pillow and goes silent. I hope it’s insight and not laziness.

I lean back against my pillow and let my mind wander in wonder. Why would a farmer in Iowa raise moose? Does he sell them for meat? Or, do people keep moose as pets. Google knows, I’m sure.

But, what motivates this particular farmer? I guess we could go back and ask.

I think back to the horse ranch near Provo that we found on the way out. Remember? We stopped and asked if we could ride their horses, and they said, “Sure.” Then we said we didn’t know how to ride and they said, “We’ll teach you.” Now, you remember, don’t you? Surely, you remember that a few years ago their daughter moved out of the house into an apartment she built in the barn just to be closer to her horses. How cool is that?

That’s what I’m thinking, at least.

When is you next road trip?

Will you take me with you?

I’m terrible at doing what people tell me I should do, but I still get things done. I’m not sure why this is, but here is my best guess:

I manage my desires more than my time.

So I decided that if I was going to do only one homework, I would make it suitable for hanging in a gallery. I spent a big chunk of my savings to buy a mathematical font attachment for my parents’ IBM Selectric and I typeset my answers. In my dad’s sculpture studio I was able to use fixative to emboss my answer sheet and mount it on a wooden backing that I carved by hand. Mr. Foster was so thrilled that he wore my homework around his neck the entire day. Other teachers saw it and they all demanded one homework from me, too. Damn!

To this day, before doing something I don’t want to do, I try to transform it into something I’m eager to do. For more on this I refer you to that great 20th century philosopher, Mary Poppins, who said, “In every job that must be done, there is an element of fun. You find the fun, and—SNAP—the job’s a game!”